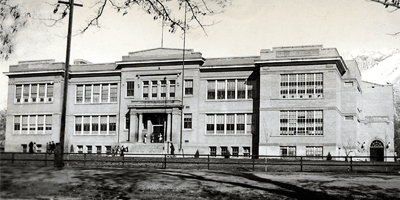 The Draper Park School (12441 S. 900 E.), listed on the National Register of Historic Places in 1982, is the largest and most prominent feature of Draper's historic town center. It may be the last building of it's caliber in the South end of the Salt Lake Valley. The design is influenced by the Classical Revival style, a popular trend for public buildings. The original section (which, surprisingly, comprises only the north 80% of the building as pictured above) was built in 1912. The rest of the main western elevation and the auditorium section were added in 1924.

The Park School is significant architecturally, and socially and is unique as the building illustrates the importance and focus placed on education by Draper's early settlers. Named after Dr. John R. Park, a leading figure in Utah's educational history, the school remains a tribute to Park who served as one of Draper's early school teachers and was famous for his methods.
Draper was settled in 1850 and from its beginning showed a special interest in education. Schooling began right away with Betsy Draper, wife of William Draper, as Draper's first teacher. Town leaders were always on the lookout for qualified teachers, and essentially paid them out of their own pockets.

After being rejected n Millcreek, Park came to Draper in the fall of 1861 and traveled near the home of Absolom W. Smith, where he asked for work. Mr. Smith told him that most of the farm work was done, but he could stay there if he wished. Park told him that he would rather work so, after a good meal, Mr. Smith put him to work husking corn.
Smith was a councilor to Bishop Isaac M. Stewart and also acted as one of the local school trustees. Smith soon discovered that Mr. Park was an intelligent, well-educated man holding an M.D. degree. Mr. Smith, with the help of other leading men, persuaded Dr. Park to remain in Draper as a school teacher, stating "We are a poor people, and we have very little ready money. We can pay your board and lodging and give you part corn, part wheat and part potatoes for your compensation." He boarded that winter at the home of Bishop Stewart. 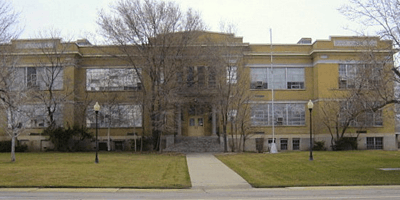 At the end of the spring quarter Park announced his decision to continue on to the West Coast.  Twelve leading citizens pledged themselves to pay him a salary of $1,200 a year in gold whenever he might choose to return.  After a year in Oregon, Park returned to Draper and found the offer still held good.
The Draper curriculum of John Rocky Park became known for it's excellence at all grade levels. Tales of Park's "Famous Village School" spread. Dr. Park, with the support of the trustees, began at once to provide blackboards, maps and charts for the new, well-lighted rooms. A student of those days has reminisced: ‘The [school’s] walls were soon covered with maps and charts illustrative of all departments of knowledge. Models and globes rested on the broad window seats. A tellurion, a miniature illustration of the planetary system, was provided..."
Park attracted the attention of Brigham Young, who visited the school and witnessed the broad, advanced curriculum Park was teaching. The finest in the West, not only were the students learning the Three R's, they were also taking field trips, assembling specimens from every animal and plant group, and classifying them in displays. Park also introduced music and leadership as subjects and created the first rural high school in Utah drawing students from all throughout the area. Draper became known as the "Cradle of Education" in the West.
Brigham Young was so impressed he proposed to build a university in Draper to be headed by Park. When disputations arose in the town, Brigham took the famed educator to Salt Lake to preside over the University of Deseret, the predecessor to the University of Utah. In 1895, Park was elected as Utah Superintendent of Education.
Of Parks tenure in Draper it was said, “From a little country village, with a population of but 300, secluded in a corner of the Salt Lake Valley, in a brief period of five years that still stands out as its golden age, went forth a surprising number of men who later achieved high success; and in that village developed a spirit and movement that in time spread beyond it and inaugurated in Utah an educational regeneration. Never was the potential power of the good teacher more strikingly demonstrated.”
Proud of its reputation as the "Cradle of Education", Draper marked this commitment to education by the construction of several school buildings to meet the educational needs of the community's youth. Before Park arrived, Draper had outgrown its first school house. A small adobe building called the Vestry was erected in 1860. In 1863 the main hall was added. It was in this "Old White Meetinghouse" that Dr. John R. Park taught school. 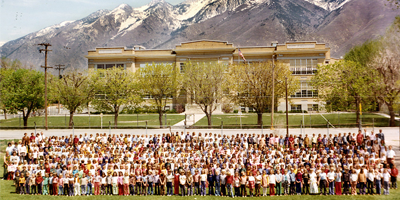 In 1883 a new school, known as the Central School, was built near where the present Draper Park School stands. William M. Stewart was the first principal and taught for four years. By 1890 two other schools had been built, one in the eastern part of town known as the East Side School, the other in the southern part of the community known as the South Side School. These three schools operated about seven months each year and had one teacher each. In 1898 the three schools were consolidated and all the pupils went to the new school built on the site of the Central School — the first Park School.

In 1902, a recognized high school was begun with J.C. Spiers as principal. It's credits and diplomas were accepted by the University of Utah. In 1912 the Draper School again felt the need to expand. The existing Park School was razed and the present building erected. It contained eleven classrooms and the principal's office. Sources indicate the architect was Nils Edward Liljenberg, architect for the School District, with C.A. Talboe awarded the contract. Liljenberg, a native of Sweden, was considered a leading Utah architect. He designed buildings for the Y.M.C.A. and Westminster College in Salt Lake City, and many public schools. To provide more room and facilities for the junior high school, a planned wing was added on the south of the building in 1928. This wing provided an auditorium, work shops, a domestic science section, a music room, stage, locker space, showers and restrooms. It was designed by the firm of Scott and Welch. With some improvements and changes, this building housed the junior high and elementary schools until 1954. In that year, Mount Jordan Junior High School was completed in Sandy, and students in seventh through ninth grades went to school there.
The Draper Park School was then remodeled somewhat with a new wing being added on the northeast corner. The interior was also refurbished to take care of the six elementary grades. It had thirteen classrooms equipped with modern visual aids, teachers, work-rooms, a faculty room, a sick room, auditorium, music room, library, and an up-to-date cafeteria and a modern gas heating plant. From 1912 to recently the Park School was the center of many community activities, including plays, events, concerts and parties, and is most loved for community traditions like the Lions Club Halloween parties where hot dogs and other treats were served in the cafeteria, and a spook alley was conducted in the unfinished basement "dungeon" of the school.

When Draper was incorporated in 1972 Draper City purchased the Park School from the Jordan School District at a deep discount. The school continued to serve as City Hall and community center until the new Draper City Hall was built around 2003. In addition, the building housed a mural painted by artist Paul Smith in 1938 as a Works Progress Administration (WPA) project. Smith's family lived in one small room on the second floor of the school while he worked. The mural depicts the history of education in Draper utilizing real characters as models. The theme of the mural is "Onward and Upward". The mural has since been removed and conserved.

Education is still an important part of Draper's heritage. The people of Draper can be credited with the relatively recent creation of several fine charter schools, and bringing the return of a public middle and high school to Draper.

The John R. Park School in Draper is a two-story yellow brick structure located on the southeast corner of 12400 South and 900 East. The front (west) part of the school was built in 1912 and shows influence of the Classical Revival, a style popular for public buildings in the early years of the twentieth century. The southeast rear auditorium was added 1928 and a northeast rear classroom wing was added 1954, giving the school a "U"-shaped plan. Inside the "U" nestled between the classroom wing and the original school is a one-story steam heating plant which dates from 1914. The 1912 building has a parapet roof with stone coping and dentilled cornice. Three bays project from the symmetrical front façade. The wide center bay has a stone hood molding over the four center second-story windows. Below these windows is the main entrance to the school sheltered by a one-story portico that has a cornice and doric columns of stone. The two end bays on the front façade have stone name blocks above the cornice on the parapet. The north bay's inscription reads "Park Grade School" while the south bay is engraved "Draper Jr. High School". On the north side of the building, facing 12400 South, is the second entrance to the school, a projecting bay with paired brick pilasters on the first story. There are belt courses around the building above the first and second story windows as well as a "water table" above the foundation, all possibly red sandstone but now painted.

The original wooden windows were replaced with metal frame units in 1954 at the time the new classroom wing was added. Inside the original building at the south end of the main first floor hall is the most interesting feature of the Park School, a mural depicting the history of education in Draper. A Works Progress Administration project, it is painted on canvas and signed by artist Paul Smith with the date 1938. Against a background of the Wasatch Mountain Range are scenes of the pioneer fort town at Draper, the original adobe schoolhouse on this site, the building committee planning the new school, Principal Reid Beck and members of the 1938 School Board, and the Park School building as it looked in 1938 with a glimpse of the village behind it. The rural culminates in a central panel showing Draper pioneers and present residents sending the town's sons and daughters off the college. The portraits of the townspeople are Draper residents of the day, some of whom are still living in the town, while the group of pioneers include prominent Utah educator and early Draper resident, John Rocky Park, after whom the school is named. College is represented by the Park Building of the University of Utah, the state university over which Park presided with much distinction.

To the rear of the 1912 school building are two wings. The auditorium to the southeast with its parapet roof was added in 1928 and it has little exterior trim other than three large round-arched window openings on each side. The windows themselves are metal frame units probably dating from a 1954 remodeling. Inside the wing the combination auditorium/gymnasium on the second floor has heavy wood beam-like decoration across the ceiling supported by stylized brackets. The 1954 classroom wing at the northeast has simple stone trim and vertical bands of windows common in that period. The one-story 1914 steam heating plant is marked by a square tapered smoke-stack of brick.